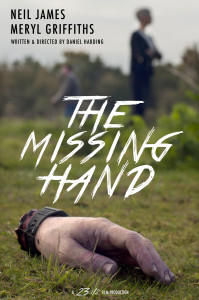 The first thing that really gripped me was the original score […] it really captures the mood and essence of the film. The music is full of suspense and mystery. It’s a sound that even Ennio Morricone would be proud of.

I have just completed work on the score for The Missing Hand, a quirky dark comedy short by  23 1/2 Films, directed by Daniel Harding. 23 1/2 asked me a few questions…

What attracted you to The Missing Hand and what sort of ideas did you have for the music? I’m a big fan of dark comedies, particularly Coen Brothers films, and the style of this film reached out to me. It’s short, simple, and has a tone that allowed for really interesting storytelling. Daniel was also very open to me developing the style and musical world for the film, he’s not the kind of director to force a pastiche or temp track onto the composer.

Did you treat this project any differently to something with a larger budget? Absolutely not! I’m in the business of scoring films because I love creating the work and collaborating with other creatives. I see no point in rushing through something or doing a lazy job, everyone benefits from a job done properly.

Can you describe what it was like working with Daniel? Daniel was incredibly easy to work with. We had a few phone calls to discuss ideas, and then I actually travelled down to Brighton to meet him in person. I think we both found that getting to know each other’s sense of humour and approach to the work made collaboration much easier and more fluid once we got into sending cues back and forth. He’s very open to new ideas and to challenging his own initial thoughts, but is also very sure of his vision.

And finally, if you found a severed hand, what would you do? Donate it to an indie filmmaker.